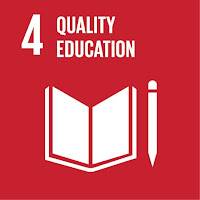 Australian universities have come out well in The Times Higher Education Impact Rankings 2021, having 4 in the top 10 and 17 in the top 100.

On the SDG goal of "Quality of Education" (central to the mission of universities), Australia did not do so well, with only one in the top 10: University of Canberra at 5 and only 12 in the top 100.

Australia had no universities in the top ten for "Industry Innovation and Infrastructure", with University of British Colombia (Canada) on top. This is well deserved, I visited UBC in 2014 to look at education and innovation.

Of course not too much should be read into these type of rankings. Those universities without the resources to devote to filling in the information requests from ranking organisations will tend to not do so well. They might instead want to devote resources to helping with development. In particular thousands of training focused institutions, which are providing most of the practical assistance with development, don't appear in these rankings. The "Webometrics Ranking of World Universities" includes about 9,000 more institutions than Times.

Unfortunately some universities choose to release misleading statements based rankings. As an example CQ University previously claimed "CQUNI RANKS IN TOP 25 PER CENT OF UNIS WORLDWIDE FOR SUSTAINABILITY" (23 April 2020). However, only about 1,000 institutions are included in the rankings. So we don't know how CQU performs against the many more thousands not included. While it might be assumed these institutions would not rank well against leading universities in terms of research output, that may not be the case in terms of quality of education or sustainability. Australian universities should refrain from making such misleading claims as it could damage their reputation and that of the nation. In 2017 the UK Advertising Standards Authority issued guidelines to stop UK universities making similar misleading claims.  Perhaps similar guidelines are needed in Australia.

Posted by Tom Worthington at 9:43 AM