Bainbridge and Ally (2015) cataloged and categorized the world's open universities. They listed the universities by size, starting with the three having a million, or more students:
The university sizes drop rapidly after this, with Athabasca having 40,000 students: 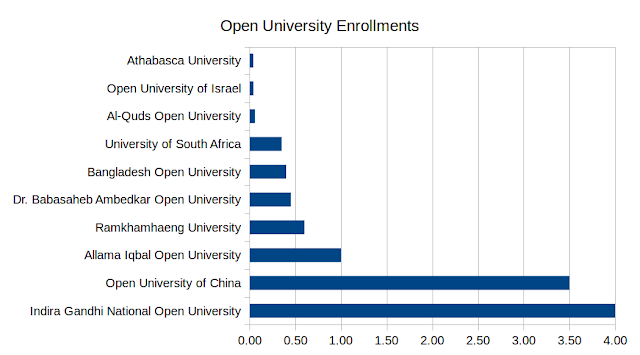 There seem to be three classes of open universities,  large, medium and small, with millions, hundreds of thousands and tens of thousands of students:


Bainbridge and Ally (2015) then list a number of distance, e-learning and virtual university. Interestingly, the authors do not list the Open University UK (founded 1969, 168,000 students) as an open university, although it is one of the oldest and best know of the institutions with "open" in its name.

Australia has no open universities, that is institutions which have  no entry requirements. There is Open Universities Australia (established 1993, 60,000 students), but this is a consortium of conventional universities, offering distance education.