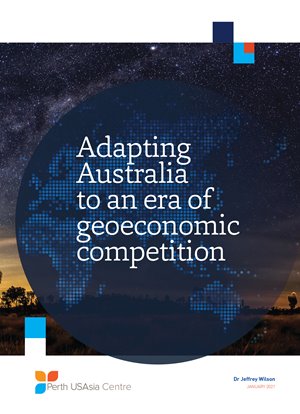 The report "Adapting Australia to an era of geoeconomic competition" (Wilson, 2021) was launched yesterday at the Australian National University in Canberra. I had a ticket to attend, but decided to stay home and participate online. This reflects one of the new realities of Geoeconomics, which threatens the viability of Australia's universities.

This report defines Geoeconomics as "the application of economic instruments for geopolitical ends" and points out its reemergence in the  Indo-Pacific, between the USA and China. The report suggests that Australia needs to adapt its liberal approach in response.

Wilson points out that education makes up 9% of Australian exports (p. 8), which is much higher than tourism at 5%, with education exports dominated by China (p. 9).

The report singles out China’s Belt and Road Initiative (BRI) as an "archetypal geoeconomic strategy" (p. 23), for economic development and international political influence. However, as well as targeting trade and heavy industry, the BRI also has an Education component which Wilson doesn't mention. This is similar to the Colombo Plan which Australia and western allies implemented during the cold war (Worthington, 2014). However, online learning considerably increases the scope for education as part of geoeconomic strategy.  Guthrie et al. (2021) predicts onshore international students at Australian universities will drop 60% by 2030 due to competition from China.

Worthington, T. (2014, August 23). Chinese and Australian Students Learning to Work Together Online: Proposal to Expand the New Colombo Plan to the Online Environment. Paper to be presented at the 9th International Conference on Computer Science & Education (ICCSE). Vancouver, Canada.

Posted by Tom Worthington at 10:48 AM