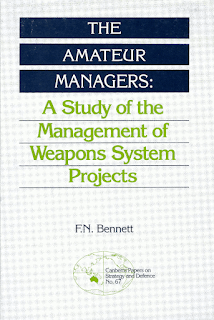 "The amateur managers" (Bennett, 1990) is a book I wish I had read when I worked for the Defence Department, reviewing IT projects. While most of these were not weapons, they had a level of complexity beyond the usual civilian administrative systems. As Bennett says, the office politics of civilians (such as myself) trying to advance projects in teams with military personnel from three services, with occasionally competing priorities were difficult*. His solution looks a good one: focus on good people, rather than processes: "Weapons systems project managers require experience, skill and especially good judgement to cope with complexity ..." (p. 59). While there were people with engineering and IT backgrounds with project management training in Defence, many were seconded from civilian administrative areas, or military jobs, with no training or experience. It is decades since I was in DoD, and I don't know if Bennett's suggestion has been adopted.

* I gave up and left Defecne when the committee I was chairing had almost agreed on draft 46 of a report. Then the military members were rotated out and people who have been driving tanks and aircraft were rotated in. I gave up and became a consultant/educator.

Posted by Tom Worthington at 5:37 PM