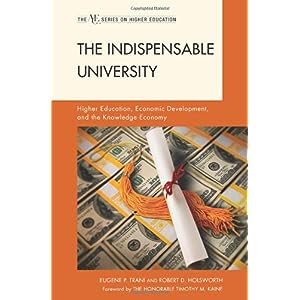 Eugene P. Traniand  Robert D. Holsworth's book "The Indispensable University: Higher Education, Economic Development, and the Knowledge Economy" (, American Council on Education Series on Higher Education, 2010), argues that universities can bring about economic development in the region they are located through policies to link with industry. This hardly a new idea and the authors cite numerous sources, including in their first chapter, my summary of "The Cambridge Phenomenon". As discussed in "Building Arcadia: Emulating Cambridge's High Technology Success", building a technology park beside a university, or attracting a major company R&D facility to a campus will not necessarily result in innovation.  The authors look in depth at how to bring about such innovation.

Hongyun Meng's 2001 thesis "Fostering the Digital Economy: Perspectives for Internet Clustering" looks at the sharing of resources, infrastructures and social capital around universities. Meng points out that while “The Cambridge Phenomenon” produced considerable research spin-offs, the companies around Cambridge University were less successful with transition from research to development, perhaps because the university academics were not so interested or experienced in this.

Meng summarises important factors for innovation (in this case for internet clusters) as:

Posted by Tom Worthington at 10:18 AM

Email ThisBlogThis!Share to TwitterShare to FacebookShare to Pinterest
Labels: Innovation, University of Cambridge