I am a masters of education student, investigating mobile learning, but was embarrassed to have to tell my professor that I did not have a smart phone or tablet device (just an old fashioned laptop with wireless modem). So I purchased an Onix Kids 7" Tablet (Model Number: ATK1-815) from Aldi for AU$69.95. If I am going to try and to design educational apps for mobile learning, I thought I should do it with a low-end device, so there is a reasonable chance that the students, particularly the less affluent ones, will be able to access the materials. Also the tablet is specifically aimed at "Kids".


The tablet came in a small box, with the black tablet itself, a bright yellow protective rubber cover, a slim 24 page manual, USB cable and mains charger. The tablet looks reasonably robust. The rubber cover is impressive, making the tablet much easier to hold and having four bumps on the back which act as feet as well as hand-holds.

Out of the box the tablet has a transparent protective film on the screen. This has arrows pointing to the power button and slots. This is very useful, but once peeled off, the user is confronted with a featureless slab of black shiny plastic, without even a hint of which way up it is to be held. For a kids computer (as well as one for older people) it would be useful if the controls were printed on the unit. The sleeve makes the camera and slots easier to see as they stand out black against the bright yellow plastic. It would be useful to have the controls printed on the rubber sleeve, both for kids and for those with limited eyesight.

The unit came charged and so it was just a matter of pressing the on button (when I could find it), swiping to unlock and up came a kid-friendly interface. The interface has rows of cartoon like icons. However, I quickly found there was little that these actually did, without first registering the unit. It appears that the unit comes with none of the claimed games or educational applications installed, these are all downloaded, requiring WiFi access.

Page 21 of the manual says "The Android Launcher icon allows you to use this device as a normal Android tablet.". However, so far I have not been able to find this icon. The unit has a Chromium browser which works well. The screen is not high resolution, but is adequate. Similarly the sensitivity of the touch screen is adequate, rather than good.

So far the Onix Kids 7" Tablet is a disappointment, as I can't install any Android Apps. Unless someone can suggest how to do this, I will be returning the unit to Aldi for a refund (Aldi provide no on-line support for this products at all). 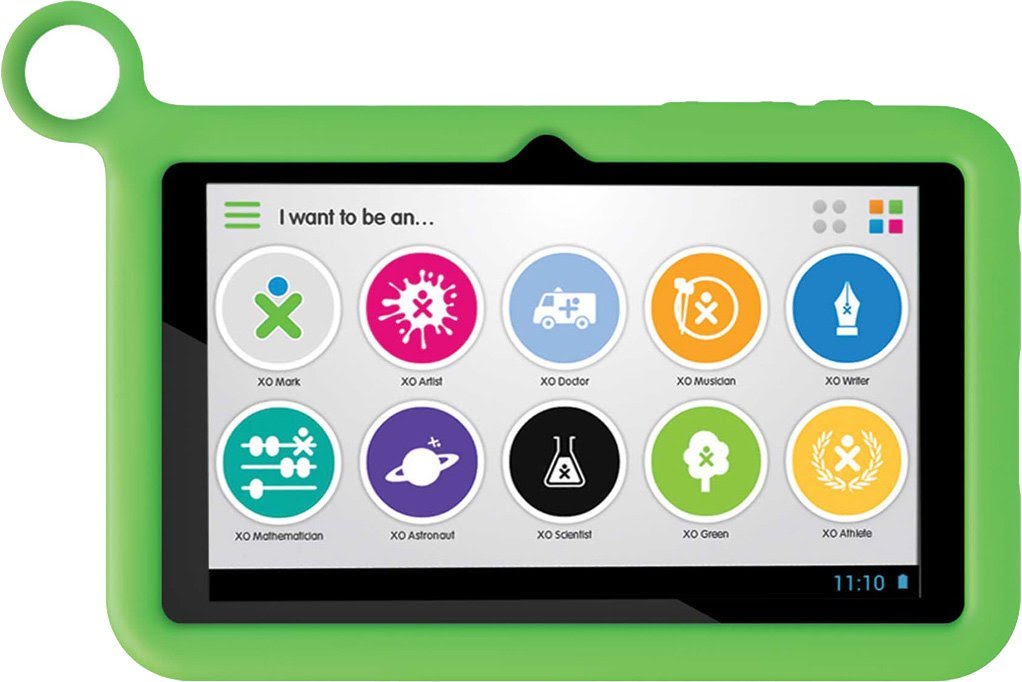 There are hundreds of models of 7 Inch Kid Android Tablet Computer offered on Amazon (and silicone cases for computers), with little to distinguish them. One which looks more interesting, and perhaps I should try is the XO 7-Inch Kids Tablet XO-880 (8GB). This has much the same hardware (from Vivitar) as the Aldi Kids Tablet and protective, but in addition to the usual Android operating system it has the OLPC educational software. This unit effectively signaled the end of the Open Laptop Per Child' project in its attempt to make custom hardware for educational computers. As an Engadget review indicates, it is another generic 7 inch tablet in a colorful plastic sleeve, but has the XO educational applications.
Posted by Tom Worthington at 10:54 AM