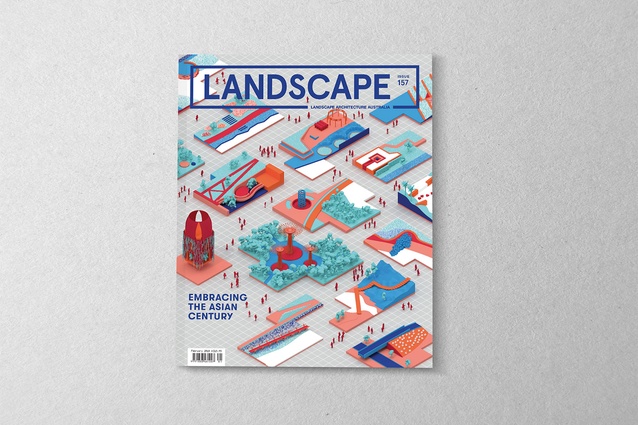 Landscape Architecture Australia has devoted its February 2018 edition to :"Embracing the Asian Century". Other disciplines may want to follow this example and look at the education of international students in Australia and how Australian practitioners do overseas. While focused on education of landscape architects, some of the articles are about universities and students in general.

In "The Changing Demographics of Australian University" (p. 22-23), Tom Harper and Brock Hogan, provide a chart of the number of domestic and international student enrollments, from the 1950s to today, with the federal governments color coded by party. This shows a gentle steady increase for the Menzies to Gordon Coalition era, then a small jump for Whitlam Labor, smoothing off during Fraser. Curiously, the most significant jump in enrollments appears to be one third through the Howard government in 2000. In contrast the Rudd/Gillard Labor deregulation is a small bump. International enrollments appear to show the same pattern. Below this on the same time scale the major landscape programs at Australian universities are shown. This is color coded as to type of degree (Bachelor or Master and the various later models: Melbourne, Bologna and 3+2). It would be interesting to see a similar chart for other disciplines.

In "Reflections on an Australian Education" Jill Walliss and Heike Rahmann provide insightful, mostly positive, quotes from international students about the Australian education experience. This is accompanied by more excellent charts by Tom Harper and Brock Hogan. One chart tracks nine international students and where in the world they study between 1990 and 2017. The point here is that students may spend multiple periods in different countries.

I was curious that there was not mention of Canada in the articles I read, as it rivals Australia for international students. There was a brief mention that in 2014 86,000 of the 580,000 international students (15%) were at offshore campuses. However, there was no discussion as to the quality of this experience versus onshore. Also there was nothing on if this was likely to increase, or if this will result in increased completion, as local partners learn to set up their own campuses. Also there is no mention what role on-line learning may have in the future. I was an international graduate student and expect this will be the normal form of graduate education in the next decade.
Posted by Tom Worthington at 1:53 PM