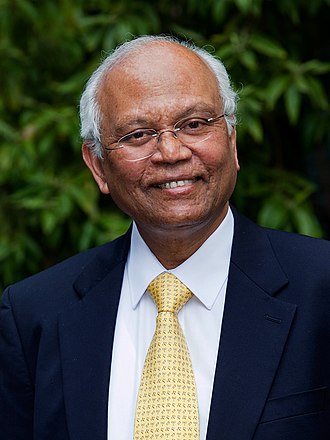 Greetings from the Australian National University, where Dr R A Mashelkar, Chairman of India's National Innovation Foundation is presenting the 2018 K.R. Narayanan Oration. Dr R A Mashelkar's topic is Dismantling Inequality Through Assured Innovation. He started by drawing parallels with K.R. Narayanan's early life, both walking barefoot to school and then receiving a Tata scholarship. He pointed out the Tata Trust dates from 1892 and predates many other such foundations.  He described this as Corporate Social Responsibility (CSR) 1.0 and propose CSR 2.0.

Dr Mashelkar described CSR 2.0 as frugal, functional, but high quality approach and used the acronym ASSURED:
Dr Mashelkarthen showed a table assesing failed technology products assessed against each ASSURED criterion. As an example, he suggested Google Glass failed on all criteria, except Excellence and Distinctiveness.

While new technologies follow a lowering cost curve (similar to More's law), Dr Mashelkarthen pointed out that the rate needs to accelerate. He pointed out that cataract surgery had become 100 times cheaper, while maintaining quality, due to work-flow innovation in India.

Dr Mashelkarthen proposed three Mantras to accelerate innovation:
The last question to Dr Mashelkar was how to cultivate innovation in Indian education. He suggested starting with schools and pointed out this is about culture, not just new school buildings.
Posted by Tom Worthington at 6:13 PM