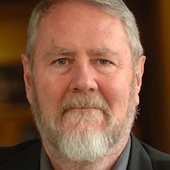 Professor Rory McGreal, who taught me open educational resources (OER) at Athabasca University, has proposed the use of blockchain for their dissemination. While most OER are free and authors are happy to see their work widely, they still want to be acknowledged for their work.

The Creative Commons licenses, commonly used for open materials, all have a "by attribution" requirement: "... the original creator (and any other nominated parties) must be credited and the source linked to". However, this is only a legal and moral requirement, the technology doesn't enforce it. Professor McGreal proposes to go a step further and use a blockchain to securely record who first created the work, and all the changes made and by whom.

While technically feasible, using block chain would throw up some challenges. As an example, nothing can ever be deleted from the blockchain, so if there was something which was incorrect, or harmful, or illegal, it would be there in perpetuity.

The idea of using blockchain in academia might have other uses. Recently I have been considering how students could record their progress with assessed work, such as assignments. One problem is to find an easy way for students to record what they did, but not be able to falsify the record. I have been looking at using some form of electronic logbook stored on the educational institution's system, so the student can't tamper with it. An alternative would be a blockchain.

McGreal, Rory. (January 20, 2021) How blockchain could help the world meet the UN’s global goals in higher The Conversation. URL https://theconversation.com/how-blockchain-could-help-the-world-meet-the-uns-global-goals-in-higher-education-152885

Posted by Tom Worthington at 12:33 PM