Teachers Without Tech a Scandalous Waste 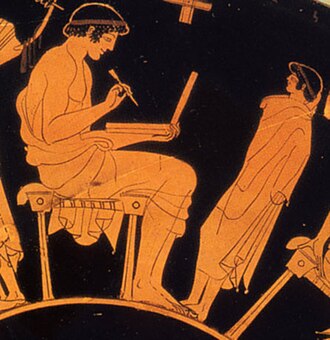 Dr John Vallance, Headmaster of Sydney Grammar School, has been reported as saying that money spent on computers in Australian schools was a “scandalous waste of money’’ ("Computers in class ‘a scandalous waste’: Sydney Grammar head", Natasha Bita, March 26, 2016, The Australian). Dr. Vallance is in good company, with educators as far back as Plato and Socrates expressing concern about the use of communications technology. In the ancient academy it was the use of a wax tablet and today it is an electronic tablet. However, as Plato (thought Socrates) suggested, we need to use the new technology alongside traditional teaching, not reject it outright.

Computers remain a relatively small part of the cost of education, compared to salaries and buildings. What I suggest we need to do is focus on how computers can help teachers teach, so they can then help the students.

Dr Vallance is quoted as saying “We find that having laptops or iPads in the classroom inhibit conversation — it’s distracting.", which is true, but is missing the point. Computers can be used before and after the discussion in the classroom, in "flipped" mode. Students can study via the computer so they are better prepared for group discussion in the classroom. Also tablets, video screens and interactive white-boards are very useful for bringing a group together, if the teacher has been trained in how to use them.


Dr Vallance suggests that he would hire another teacher, rather than "filling a classroom with laptops". However, a classroom full of laptops only costs about $10,000 per year, whereas a teacher costs about ten times as much. Eliminating computers would not significantly reduce the cost of education. Computers can reduce the cost of education, not by directly replacing teachers, but by freeing them from administrative and routine tasks.

As well as improving learning, teachers can be trained to use computer to reduce the administrative tasks which take up their time and lead to frustration. As an example, small routine quizzes can be automated, so they don't have to be manually marked and large assignments can be submitted on-line by students. The routine communications with students, about what is needed when and what has changed, can be done on-line.

The key to using computers for education is ensuring the communication is well designed and the students will pay attention to it. This is not something which comes naturally to teachers, they need to learn to do it and to practice to do it well.

Before the invention of the printing press, students had to transcribe texts from the blackboard, as they did not have their own textbooks. No doubt some teachers though the textbook took away from learning, just as some now think the computer does. But used well, the computer, like the textbook, frees th4e student and the teacher from some of the drudgery of education in a cost-effective way.

ps: In his Headmaster's Introduction, Dr John Vallance mentions the teaching of Sanskrit. This has been successfully taught on-line from Australia to students in India.
Posted by Tom Worthington at 11:53 AM