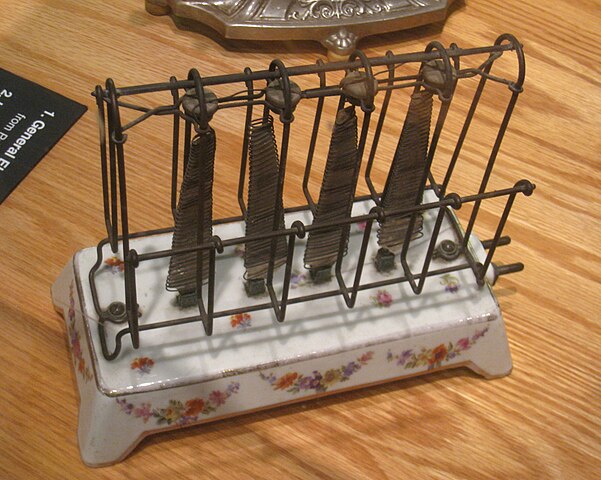 E-learning is a like a modern toaster: remove the "e" parts and what you are left with is education as it was 100 years ago.

Recently my electric toaster stopped browning one side of the bread. This is the "bagel" function on advanced toasters, but I want toast. When the toaster tripped the earth leakage detector, shutting off power to my apartment, it was time for a new one. But what to do with the old toaster?

Canberra has no toaster recycling service and I did not want it to end up in landfill. So I disassembled the toaster (after ensuring it was unplugged), putting the metal and plastic parts in the household recycling bin. What I noticed was than under the large sleek modern stainless steel outer shell was a lot of empty space and a small old fashioned looking toaster, with a small electronic circuit board attached.

The toaster mechanism was an assemblage of folded steel, springs, wire and a large brass knife-switch, which would have been familiar to someone one hundred years ago. The circuit board adds a timer to the toaster to make it "automatic". Remove the timer, outer case, lights and buttons and you have an old fashioned toaster. Similarly, a modern car, without the streamlined panels and computer controls, is a steel chassis with an internal combustion engine (or electric engine) and would be familiar to a mechanic from 100 years ago.

This got me thinking that e-learning is a like a modern toaster: remove the "e" parts and what you are left with is education as it was 100 years ago. Education still consists of first working out what the student needs to know, then how to test it and then how to teach it. E-books can replace books, on-line tests replace paper tests, videos replace lectures, but underneath all this window dressing are the same basic educational techniques.
Posted by Tom Worthington at 10:57 AM