Do Begging Letters from Universities Work?

Today I received begging letters from two universities I studied at. Recently I also had a call from a student at the behest of the university asking for money. I find this annoying and distasteful.  am happy to support universities through taxes, student fees, an annual donation and occasional, endowment. However, I don't like the way universities go about trying to get more money out of me. Each time I get one of these emails, I mark it as "spam".

Here is a sample from one email:

"If you are considering a year-end donation, I want to tell you how your gift to ... University can really make a difference.

While I may not know your personal story, I know it took hard work, dedication, and grit for you to earn your degree. ..."

"Hi Tom, thank you for being a part of the ... donor community. A student filmed this video to express our gratitude for your continued support."

The first is at least being honest in that they say they don;t know me, whereas the second uses fake familiarity.

Interestingly I have never had one from the not-for-profit vocational college I also studied at. That might be a good reason to study in the VET sector, so you don;t get so much spam, and harassing phone calls.

Do these begging letters generate a significant amount of revenue? Do phone calls generate enough to cover the cost of the wages paid to the people making the calls?

Posted by Tom Worthington at 9:08 AM No comments:

This is a plea, and a warning, to academic conference organizers to retain an online option for events post-pandemic. As Skiles, Yang, Reshef et al. (2021) report, virtual conferences forced on organizers by the COVID-19 pandemic have improved diversity, equity and inclusion in science and engineering conferences. Regrettably this may be a temporary, with some organizers I have contacted indicating they will only provide online access for those unable to get to the venue due to the pandemic.

Where pandemic restrictions are lifted, some delegates may no longer be permitted to attend online. That this will exclude most of those who could previously attend, either is of no interest to the organizers, or seen as a a positive. The organizers want high quality delegates who can pay a high price to attend. Those who are from low income countries, or institutions which cannot subsidize high fees are not wanted. People who may not be able to attend due to child mining duties are similarly considered not worth having at the conference. The ideal delegate is a white, western, male from a wealthy university in the first world, with a wife to look after the children.

In the past there have been online conferences, but these were fringe events. The pandemic has shown an online event can be mainstream. Given this has shown to be the case, is it ethical and lawful to deny access to disadvantaged groups by removing the online option? I suggest not.

Martin Dougiamas, creator of the Moodle, is talking at EdTechPosium on the future of the learning management system. Moodle 4 is getting a makeover with a new user interface. The problem, as Martin explains it, that Moodle looks old fashioned, compared to Apps. For me this is not a problem, as I like the basic interface. The problem is how to freshen the design without making it too complicated. The preview shown looked a good clean approach for thsients who want "Just show me what I need to do next".

Next Martin talked on the Moodle Academy, which has free courses for educators, administrators and developers. This is based on a European standard, but implemented specifically for Moodle. Each course has an introductory quiz, to help potential students decide if the course is for them.

MoodleNet provides a curated collection of educational content which can be used in courses. This is a challenging area. When a student of open education I had to find content to use. It was very difficult to find quality, complete, educational content. What I instead found were outlines of courses, but not the full, usable content. I will see if it is possible to donate my ICT Sustainability course and reflective learning module.

Lastly Martin speculated about the use of wearable devices for education. One example was being able to provide healthy eating information when in the supermarket. I worry that instead the consumer will be bombarded with 3D advertisements. Martin touched on this by arguing that this should not be left to companies such as Meta.

ps: I bumped into Martin at EduTech Asia 2018

Posted by Tom Worthington at 2:36 PM No comments:

ANU DVC on the Future of Learning 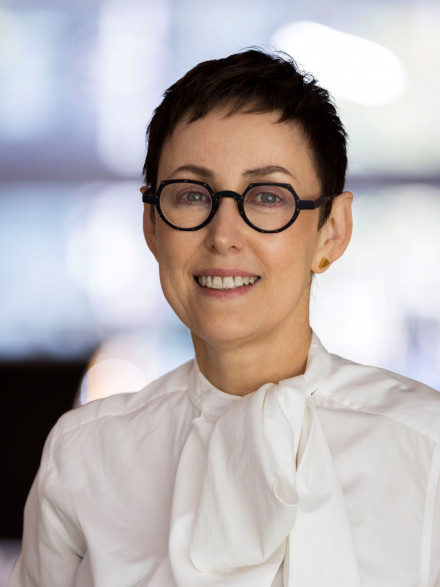 Professor Maryanne Dever, ANU Pro Vice-Chancellor (Education & Digital), delivered the keynote at the opening of EdTechPosium 2021 in Canberra this morning, with a gentle dig at the Australian Government: "We are not helped by the revolving door around the Minister for Education".But the PVC started on the tech side about providing suitable leaning management systems, then the need to help staff to use them effectively. She moved the broader topics of offering international students to option of studying online at first before comping to Australia to work and study. As someone who has spent the last ten years teaching online and three years as an international online student, much of what the DVC envisaged has been my daily life for all that time. So I suggest aiming for even more flexibility. Australian universities can offer all students, not just international ones, the option of studying wherever they happen to be for must of their study. In practice students will still want to come to campus, and my rule of thumb is this will be about 20% of the time.

"Massive digital disruption of the pace and scale we have seen was not on the agenda for our higher education system. While Australian universities have managed with varying degrees of success to deliver emergency online learning in the wake of COVID19, most of us are still processing what the last 18 months mean for the future of university learning and teaching. In this presentation I will draw on my experience managing change across this period to explore some of the opportunities offered by this new normal, reflect on the comfortable assumptions that have been shattered, and question what it might take if we are to emerge from this moment in better shape than we went in."

Posted by Tom Worthington at 11:55 AM No comments:

Greetings from the opening of EdTechPosium 2021 at Canberra Grammar School, where the host, Dr Justin Garrick, Head of the School, is talking about not only teaching students online, but caring for them. He pointed out that the response to the pandemic would have been very much more difficult five years ago, without the online systems now in place. These needed to not only technically deliver learning materials, but look to the individual needs of students. He expressed admiration and gratitude to the educators and technologists who made this possible, I admit a little pride to have been one of those people.

On the way into the event I was interviewed for a podcast. This is always interesting, as I find myself looking on wondering what I am about to say. It turned out to be that one of the good features of online learning was that it can provide more direct and individual communication between students and staff, than face to face.
Posted by Tom Worthington at 10:21 AM No comments:

My Picks for EdTechPosium 2021

My picks for Edtechposium 2021 in Canberra, Friday 10 December, and online:

05:00 PM - 05:25 PM Are we neglecting staff and student support and training for the Education Enabling Technologies? – SC202 By Liane Joubert ANU

Posted by Tom Worthington at 11:28 AM No comments: