Australian Centre on China in the World in Canberra 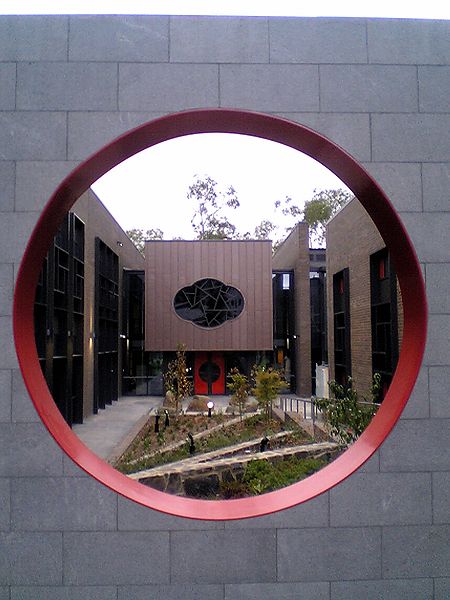 Gerald Szeto (司徒佐), architect of the center's new building, is speaking on "The architecture of education in Canberra and Beijing". The building was funded by the previous Australian Government. This was preceded by a musical performance, on a Guzheng (Chinese zither) and voice, by Wu Fei.

Curiously for a major research centre, there was no Wikipedia entry, so I have created one,  including a photo of the courtyard, as seen through a window near the front door. The building has the feeling of China, while being modern.

Gerald Szeto gave an illustrated presentation of his work in China, as part of I. M. Pei's architectural practice. He then set up his own practice in China, the first major commission was to reconstruct the Hall of Rectitude  and the Garden of the Palace of Established Happiness in the Forbidden City, Beijing. while the outside of the buildings were reconstructed using traditional building techniques to the original design,
Gerald Szeto's practice designed the interior for modern use. The interior still used traditional materials, but has much larger rooms, with modern heating and lighting. The structure of the building is visible inside, where it would be traditionally hidden by interior panels.

Gerald Szeto then described the sighting and design of the Stanford University Centre at Peking University. However, the historical significance of the site limited the area available to 600 square meters. As a result it was decided to build much of the building underground, with one level above ground and two below ground. This required overcoming concerns with light and ventilation for an underground building. The above ground part of the building is of traditional design and construction and has skylights for the underground part. There are light-wells with gardens to give a view for the underground rooms.

The above ground part of the Stanford University Centre is made of large wooden columns and beams fitted together with mortise and tendon joints (no metal fixing). After the wooden structure is erected, brick walls are added (much like an Australia brick veneer building).

Stanford University Centre at Peking University has a high immersive teaching room, equipped with large screen video-conferencing, twinned with an identical room at  Stanford University in the USA. Gerald Szeto commented that the set-up was expensive, he did not like the layout and the identical arrangement was not really necessary. I agree with all of this, a simple rectangular room with a flat floor, movable desks and a standard projection screen (or large flat panel display) would work just as well, be much more flexible and much cheaper.

Gerald Szeto then moved on to the design of the China Center at ANU in Canberra. The building runs north-south, next to an oval and is then divided into north and south wings by a courtyard. There is a large auditorium on the north side. The entry to the building has a wall with a window in it to show the courtyard. The building has windows which are reminiscent (to me) of stained glass, having an ecclesiastical feel, appropriate for a centre for quiet contemplation.

The presentation is being given in the auditorium of the building. This is well proportioned, but the seats do not have folding table-tops for students to take notes on (my laptop is overheating, sitting on my lap). Also the lectern does not appear to have been equipped with the standard ANU audio-visual system, preventing lectures from being recorded.

One excellent feature of the building is breakout spaces with tables and chairs between the offices, rather than just a narrow corridor. Such spaces are very important in a university, as it is where much of the communication and innovation happens (as well as in the coffee shop and bar).

Lastly Gerald Szeto described the recently announced Yenching Academy at Peking University. This is a new large residential college for the university. Currently there are US designed two story buildings fronting onto a "gymnasium" (that is outdoor recreation space). As with the Stanford centre, the existing buildings will be restored and retained for accommodation, but with two new stores of teaching space added underneath.

Gerald Szeto pointed out that the academy had to have a bomb shelter included in the design, complete with all survival equipment. This space can be used for storage, but is not suitable as a teaching space. But I suspect that as space at university is always in short supply, the bomb shelter will be turned into offices for junior staff. One way such spaces could be made more comfortable would be to use of low cost Ultra High Definition flat screen displays. The pixels on these screens are not visible from for than a few meters away and would give a reasonable facsimile of a window view. The screens could display scenes from the surface when not in use for education.

The overall concept for Yenching Academy the circulation spaces, offices and accommodation are impressive and I would like to be a visiting scholar staying there (Yenching Academy is currently looking for English speaking staff members). Yenching Academy is looking for staff members. However, the designs shown for the library, lecture theatres and tutorial rooms showed a similar inflexible layout to the Stanford University Centre. I would suggest having a more flexible layout, with flat floor and movable furniture.

The approach of new underground buildings maybe applicable to Australian university campuses with limited space. It would be feasible to add new space under existing historic buildings on cramped city campuses. Something like this exists at University of Melbourne, under  University Square, but unfortunately this remarkable structure (used as a set for the film  film Mad Max) is just used as a car-park.
Posted by Tom Worthington at 7:05 PM